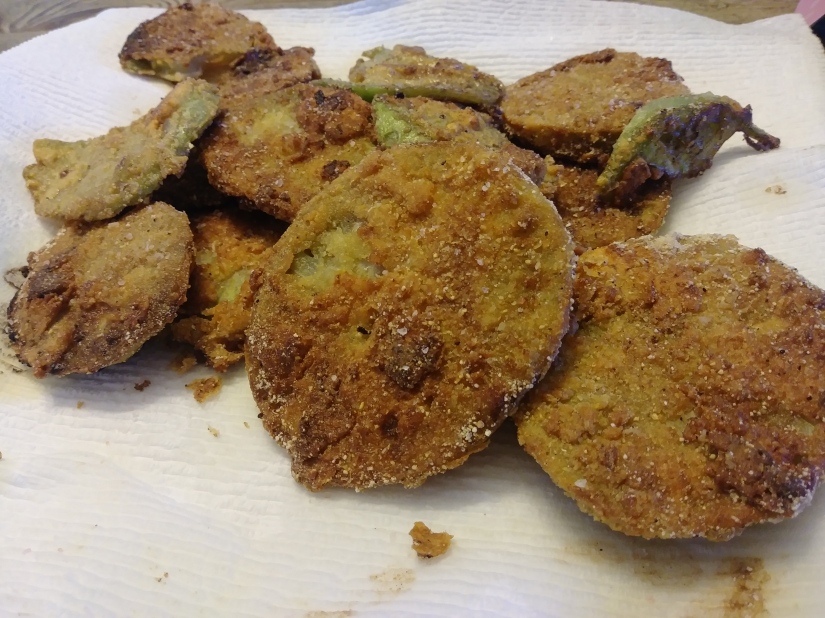 So last wednesday I got home from work a bit later than usual. I was somewhat at a loss about what to cook for dinner since the majority of my week had been spent cleaning up an recovering from Neyland’s Circus birthday party. I poked around in the fridge, but nothing seemed to jump out at me. Neyland had already informed me that she just wanted leftovers, but I was in the mood for something more exciting.

I walked out to toss some chlorine tablets into the pool and just happened to peek over the fence and glance into the garden to see if anything needed my attention. My tomato plant that was stunted by a late frost, had recently decided to “earn” his keep, and start producing. Upon closer examination I noted 4-5 medium sized tomatoes looking big and beautiful hanging from the vine. Only 1 problem- They were completely green. Then it hit me…..FRIED GREEN TOMATOES!

For the record, I have never made fried green tomatoes before, and it had been some time since I had eaten any. I shrugged off the uncertainty. After all, how hard could it be?

Neyland helped me harvest 4 of them and I got to work searching for a quick recipe. The one thing I KNOW about fried foods is a complete necessity to “double dredge” and get a good crust. I found a recipe that included this vital step, it was pretty highly rated, and seemed relatively simple. Hmmm…maybe too simple? It seemed like perhaps I could kick it up a bit in the flavor department. I quickly gathered the ingredients, with the exception of buttermilk (which I didn’t have on hand.) Thankfully if you ever find yourself in a pinch (which this certainly was) there is a handy way to make “cheater buttermilk” using regular milk with a splash of vinegar.

I prepared my dry dredging ingredients that I kicked up with extra flavor along with my “buttermilk” + egg mixture and got my pan/oil preheated while I sliced the tomatoes and coated them. Always make sure and let your pan/oil get up to temp before attempting to fry anything. If it isn’t hot enough, it will just cook the food slowly and make it mushy rather than crispy.

When the oil is hot enough, you quickly get a nice golden brown crust that forms. It helps keep the inside from getting too soft, while creating a magnificent crunchy shell on the outside.

I fried them in batches to prevent overcrowding and slowed cooking. After they were all done, I drained them on a paper towel to absorb excess oil and simply sprinkled them with some Himalayan pink salt. Most FGT that I’ve had in the past needed some type of dipping sauce, but these were simply fantastic straight from the pan. I was astonished when Neyland agreed to try one and she LOVED IT!

For a great southern recipe, give this one a try!

Combine the egg & buttermilk in a shallow bowl and set aside.

Combine the flour, cornmeal, salt, pepper, garlic powder, paprika, and cayenne pepper in a shallow bowl and set aside.

Pour oil into pan (preferably cast iron skillet) to a depth of 1/4 inch. Heat on medium heat until hot. Approximately 375 degrees. Drop the slices in batches into the hot oil and cook 1-2 minutes per side, or until a crispy golden brown crust is formed. Remove and drain on a paper towel. Sprinkle with salt and enjoy while hot.

*For an extra “southern” experience, eat these guys while watching Fried Green Tomatoes the movie!

Follow The Southern Yankee Mom on WordPress.com
Join 46 other subscribers